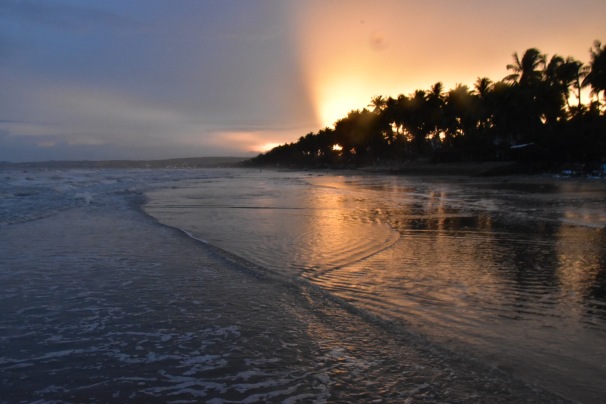 In your minds eye imagine for a moment your perfect beach scene: gorgeous waves lapping up onto miles of sand, lined by palm trees, maybe a hammock or two swaying in the gentle breeze, that cools you from the heat of the sun. The beach at Mui Ne ticks all the boxes as the pictures above and below shows.

As I stood in the sea taking this snap of our beachfront villa I felt something…..not in a spiritual or emotional way, I felt an actual something……clinging to my knee. A sad, limp, sandbag, minus its cargo, had abandoned its post & attached itself to me. As it held on it was joined by other bits of rubbish, plastic bags and unidentifiable fishing detritus. Normally I don’t mind being the centre of attention, but I draw the line at becoming a waste receptacle.

More seriously, this summed up one of the greatest challenges facing Vietnamese tourism – litter, piles and piles of it. In the UK our beaches are pretty good & we have armies of volunteers only too willing to do litter picks & clean ups. In fact some of those events now struggle to find much to clear. In Vietnam there is a real problem & with it comes the risk that it will kill the golden goose, turning off the tourists who are a key part of the country’s economic growth. More important than the aesthetics, is the damage being done to sealife as well as the risk to public health.

Most of the beaches we’ve visited so far haven’t been too bad, with a judicious turn of the head any litter in view could be moved to our blind spot, edited out of our beachside bliss. There is no escape from reality at Mui Ne beach. Don’t get me wrong, this is a glorious spot, but it’s become completely spoiled – saddening and maddening in equal measure.

As we wander down the the main drag of shops & restaurants which, run parallel to the beach, piles of rubbish are deposited along the route. With no strict system of refuse disposal & collection these huge mounds will, no doubt, end up with the other piles of rubbish on the beach ready for its journey into the ocean.

As I type this a dozen people are doing their best to clear rubbish in front of desirable beach homes. I don’t envy them & I’m not entirely sure it’s being collected for removal, or is just being moved around the corner – out of sight, until high tide comes to redistribute it elsewhere on the Vietnamese coast. I fear the blight of litter is something we will return to as our travels & this blog progresses. 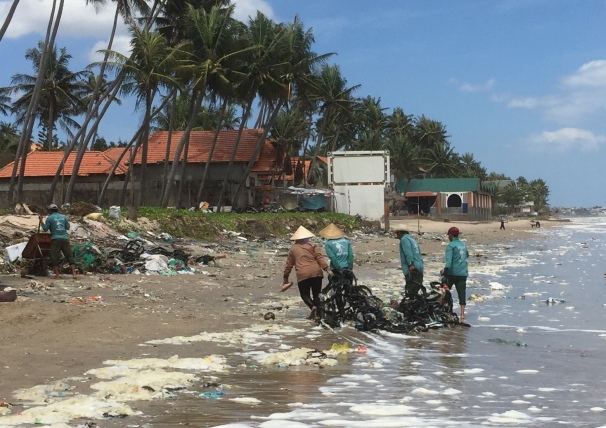 One of our indulgences is having massages & our hotel in Mui Ne included a beach side spa. That makes it sound very grand, it was really more of a glorified hut with a few beds installed. Both Sam & I went for a back, neck & head massage, 45 minutes for just £7 each – bargain!
I always seem to get more robust treatment than Sam & this was to be no different. Lying face down trying to relax after the masseur had pulled my pants down to reveal more bum cheek than I felt was absolutely necessary, the bed shook as she hopped onto it. Using only my sense of touch (& the accompanying pain) I detected a foot starting to rest on the base of my spine swiftly followed by her second foot being planted firmly between my shoulders! As my eyes nearly popped out of my head from the pressure I tried to picture the image in my minds eye…..she’s surfing me! Remarkably I felt the outside edge of both feet fit snugly either side of my spine, a technique I imagine was last used by the Viet Cong to extract intelligence from captured G.I’s. If I suffered osteoporosis she would have been ankle deep in my lungs at this point. The whole experience was quite traumatic, so much so that I went back for seconds a few days later……Sam taking the opportunity to capture the scene in all its glory (minus excess bum cheek I’m pleased to say).

These ‘lyric’ headings are starting to get tenuous – apologies to Macca for that one!

With the beach less of an option, we took a tour of the local sites to see what Mui Ne has to offer, which is quite a lot, from Red & White Sand Dunes….

Fishing Villages (happily you can’t smell the stench which hit us upon arrival!!)..

to a journey up its Fairy Spring, a lovely stream leading to a waterfall… 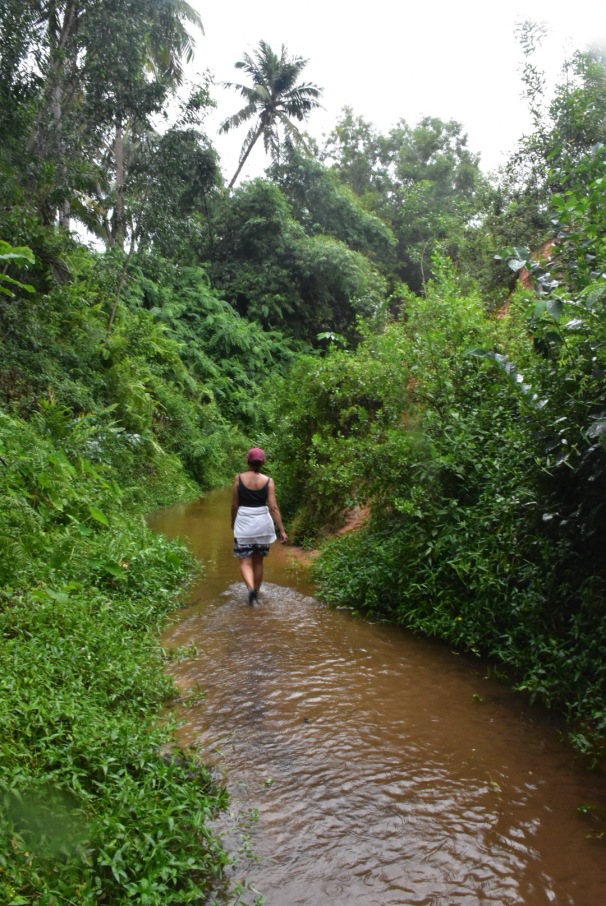 We toured around the sites in a battered old jeep with a driver who spoke no English. It was sign language all the way, which didn’t detract from the experience at all. No question of seat belts as the seats themselves didn’t appear to be fixed to anything! I looked down to see a large hole in the footwell that I could have put my feet through Flinstones style. As we careered down the streets, which at best were pothole ridden & at worst uneven dirt tracks, my seat began rocking back & forth. A short while later it broke completely & I took up a reclining position stretched out in an apparently relaxed (not!) position. I couldn’t help recalling the Beverly Hillbillies, my daydreaming regularly disturbed by a banging sound from the rear which turned out to be Sam bouncing back & forth across the back seat like a pinball. Initially we thought we wouldn’t be able to cope with this chaos for the duration of the trip, but like Vietnam itself you find yourself quickly adapting to the madness and before you know it there is a crazy grin of happiness creeping across your face. 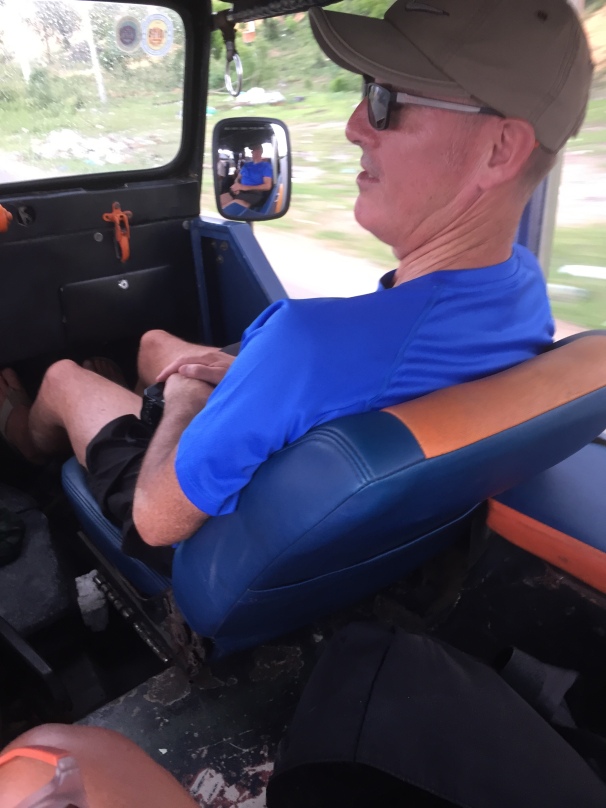 In the past we’ve often taken holidays in late June/early July so we’ve watched the World Cup & Euro’s from some weird & wonderful places – witnessing Zidane’s Final head butt while breakfasting in the Big Sur being a highlight. Just days before setting off we learnt that Vietnam had not secured any broadcast rights for the tournament – panic!! Inevitably a deal was sorted & there was full coverage. The main problem was the late game, which for us kicked off at 1.00 a.m – so we abandoned hopes of watching the matches against Belgium & Colombia. The earlier Sweden game was hugely enjoyable & despite knowing no Vietnamese it was clear that the pundits weren’t impressed with Raheem Sterling. Here is a pic of us celebrating that win.

We couldn’t sleep through the Croatia game, resigning ourselves to the probability of extra time, penalties, defeat, & bed at 4.00am. Unfortunately, the English defence curtailed our pessimism. As ever, we found neutral fans supported Brazil, although once they were out & given the huge popularity of the Premiership, England became more popular. There might also have been an element of pity, supporting a small, increasingly isolated nation with an unstable government & uncertain future – a plucky team of underdogs led by an eccentric bearded man wearing an inexplicable waistcoat. Had we won the World Cup superstition would have dictated that we watched every future tournament in Vietnam! It’s the hope that kills you.

Learning Vietnam’s Rules of the Road:

Rule 1 – there are no rules
Rule 2 – there is no such thing as a one way street
Rule 3 – there is nowhere a Moped can’t go
Rule 4 – when you think you’re safe – that is when you are most vulnerable
Rule 5 – when crossing, look left & right…..simultaneously
Rule 6 – traffic lights: