After a month away from Saigon we returned to it with a bit of foreboding – would it be as overwhelming as when we first arrived? Our journey back from Mui Ne started well with another trip on the Vietnamese Railway. We travelled second class again but our carriage wasn’t overcrowded & we had seats with plenty of space to stretch out, unencumbered by boxes, although we were nearly crushed by a very large bag of kumquats – what a way to go!
We read, dozed & watched the countryside roll by for four very relaxing hours, chatting to travellers intrigued by our visit to their country & the impressions we had gained.

We may have acclimatised, & not had a long flight to recover from, so our second stint in Saigon was much more manageable & we felt we got to know the city much better. Our first full day back was taken up visiting Cholon – Saigon’s Chinatown. It’s an intense, fascinating area which captures much of the spirit of Saigon in its dense ramshackle streets, marketplaces, and elaborate Pagoda’s where incense fills the air. Occasionally there are glimpses of colonial architecture that adds to the neighbourhoods character. 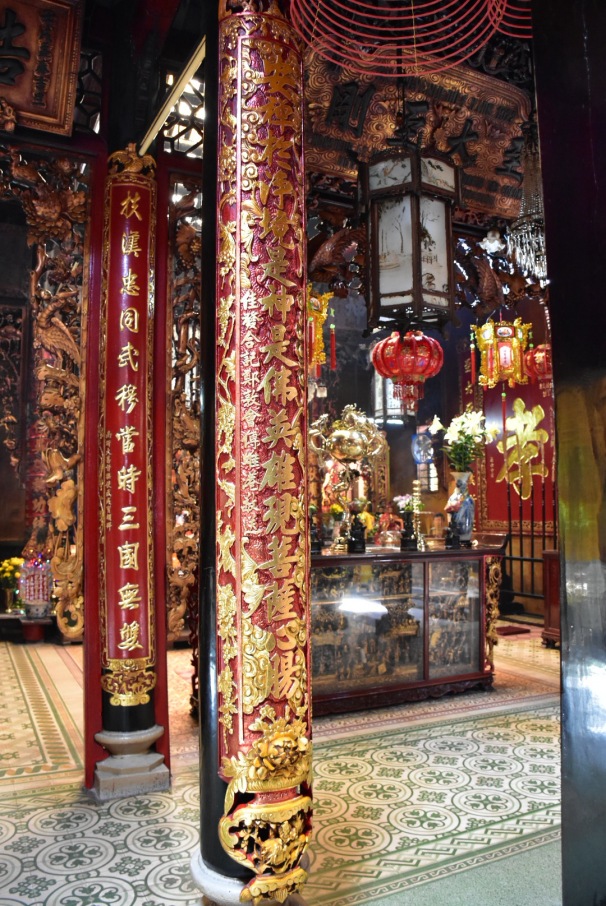 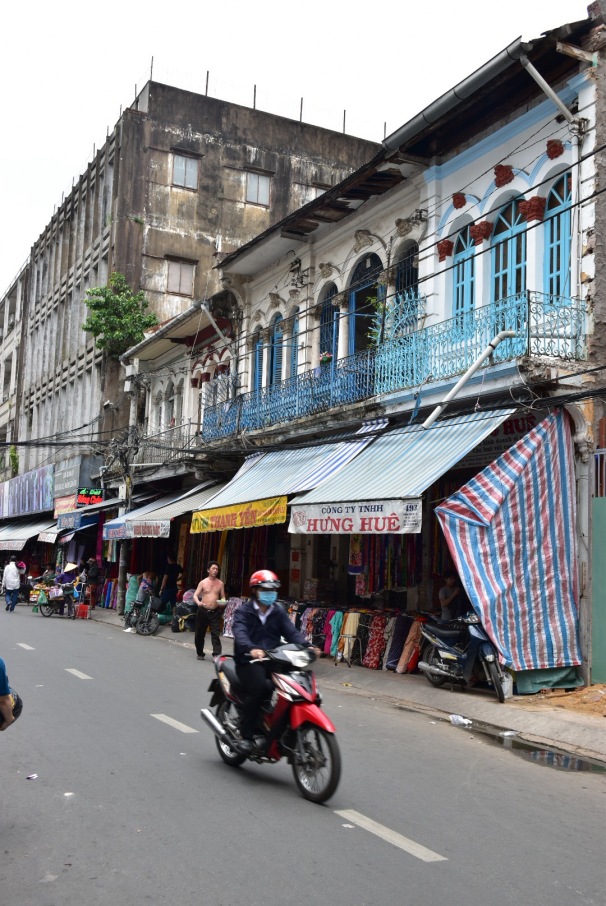 You can’t go too far in Saigon without coming across reminders of its 20th century conflicts. Amid the Pagoda’s in Cholon is Cha Tam Church, the final hiding place of the hated President Diem & his brother before their brutal assassination in 1963. The Kennedy administration had given up supporting Diem & acknowledged they had hung him out to dry by backing the coup against him, effectively signing his death warrant – just 3 weeks later JFK himself was assassinated.

In contrast to Cholon we spent the next day in the upmarket area of Saigon, with its high rise buildings & western designer shops; Gucci, Chanel etc – a chance to replenish our meagre stock of clothing! (Zara & H&M I should add, not the former!) We’ve started ditching items that are too hot to wear or have been shrunk / discoloured in the laundry, replacing them with the thinnest cotton we can find that still preserves modesty. We also discovered that although the plentiful, & incredibly cheap, laundry services are on the whole very good, they clearly chuck everything in on a hot temperature & don’t separate colours. So whites soon become grey & ankle length trousers start heading north.

The traffic is more manageable in the area and although modern it boasts the Notre Dame Cathedral, Central Post Office (designed by Gustave Eiffel), the Opera House, and the Governors Colonial Home – all built in the late 1800’s by the French Colonialists. Here is Sam in the Post Office: 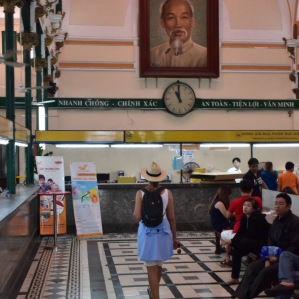 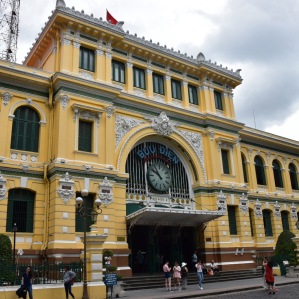 Towering over the area is the Bitexco Tower a stunning addition that provides wonderful 360 degree views from its sky deck. We made two visits to enjoy the stunning city views during the day & again to see the neon come to life once darkness falls. 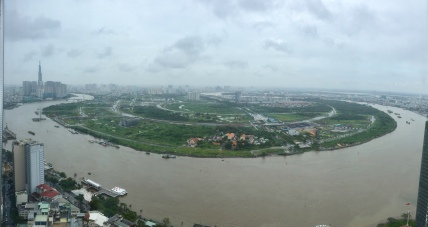 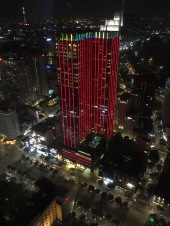 One of the must-do trips in Saigon is to the Cu Chi Tunnels, 30kms north of the city. Started during the war against the French, they expanded dramatically when the Americans arrived, the Viet Cong building an incredible 250kms of tunnels in Cu Chi, several storeys deep that included living quarters, kitchens, and meeting rooms, and extended under the American’s bases. It’s an astonishing testament to the tenacity, endurance and ingenuity of the Vietnamese and you begin to understand why the Chinese, French & Americans have all been sent packing. The tunnels have been enlarged for tourists to experience, but they are still small, hot & claustrophobic. Sam was far braver than me & managed to get through a section of the tunnels in one piece but was happy to step out before they narrowed to the bottlenecks that require crawling to get through – designed to prevent larger GI’s from pursuing their enemy. 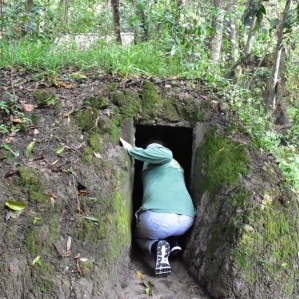 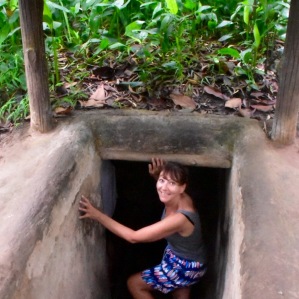 Alongside the tunnels are displays of the gruesome booby traps that used various combinations of spears & spikes to kill or seriously injure – when camouflaged they are undetectable. With the energy sapping heat & jungle reducing visibility it’s hard to imagine how typical raw, young recruits drafted by the US coped with chasing & fighting an enemy they couldn’t see while constantly risking stepping in mines & traps. It must have been terrifying & bewildering.

Cu Chi is remarkable & it’s a privilege to see it, but it feels as though the drive to make it a tourist attraction might have gone too far. You can go to a range & fire off deafening live rounds into a hillside if that’s your thing. However, there didn’t seem to be anywhere that remembered & honoured the thousands that were killed at the site, which American B-52s tried to carpet bomb into oblivion when they couldn’t locate and destroy the tunnels in any other way. Maybe there is a memorial & we weren’t shown it, but if there is it should be a part of every tour. After all, this site is a mass grave.

After our return to Saigon we headed west to the Mekong Delta, Vietnam’s pancake flat rice bowl that sits in the south west corner off the country, bordering Cambodia. The Rivers that make up the Mekong Delta look unreal, being red/brown in colour with all the mud and silt collected from a journey started thousands of miles north in China & Tibet. On checking into our hotel in Can Tho we were lucky enough to be put on the 31st floor giving us an amazing view of the rivers and delta. We could easily have spent the week staring out of the window. 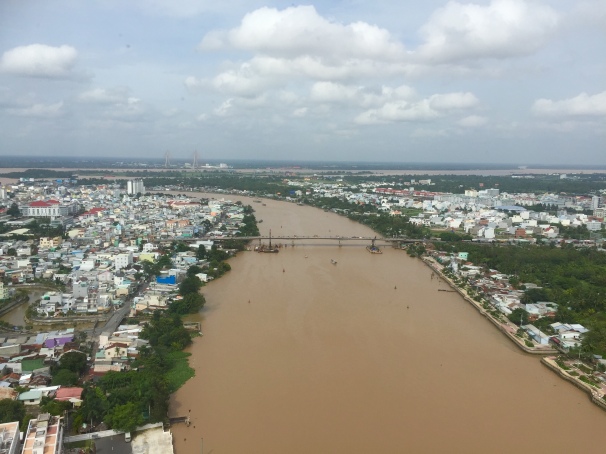 After a day familiarising ourself with the town & checking out the obligatory Ho Chi Minh statue (in Can Tho he looks a bit like the Tin Man from Oz), we were up at the crack of dawn next day to head off to Cai Rang floating market, the largest in the Delta. The market is at its best & busiest between 5 – 6.00 a.m, hence the early start. We clambered into a small sampan with a lovely couple from Belgium & puttered up the river toward the market. It takes about 45 minutes & by the time we got to the market we were both feeling a little queasy. Our boat was tied to the sampan that serves breakfast for tourists & market folk alike. A very hearty bowl of vegetable noodle soup with chilli went down surprisingly well (especially given the time of day) and immediately settled our stomachs – it’s surprising how easy it is to adapt to local food & eating habits when there is no Plan B!

The market is a wonderful site & our guide pointed out how boats advertise their wares, tying the fruit or veg they sell to the top of a long piece of bamboo that is erected flag like, so pineapples, corn, sweet potatoes, even pumpkins were hoist aloft on bamboo poles. It was full of colour, characters, life & laughter, and we followed brekkie by climbing onto a market boat to enjoy sweet, succulent fresh pineapple. 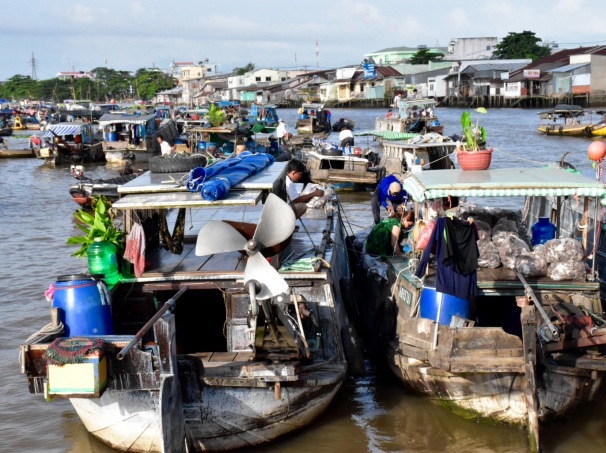 Lots of the boats have clothes hanging on lines & rudimentary ‘kitchens’. Having assumed the boats were used just to sell produce our guide explained that in many cases these were homes as well, where people spend most of their life living on the river. Although picturesque the market is also gritty & workaday – it’s where people are making a living. 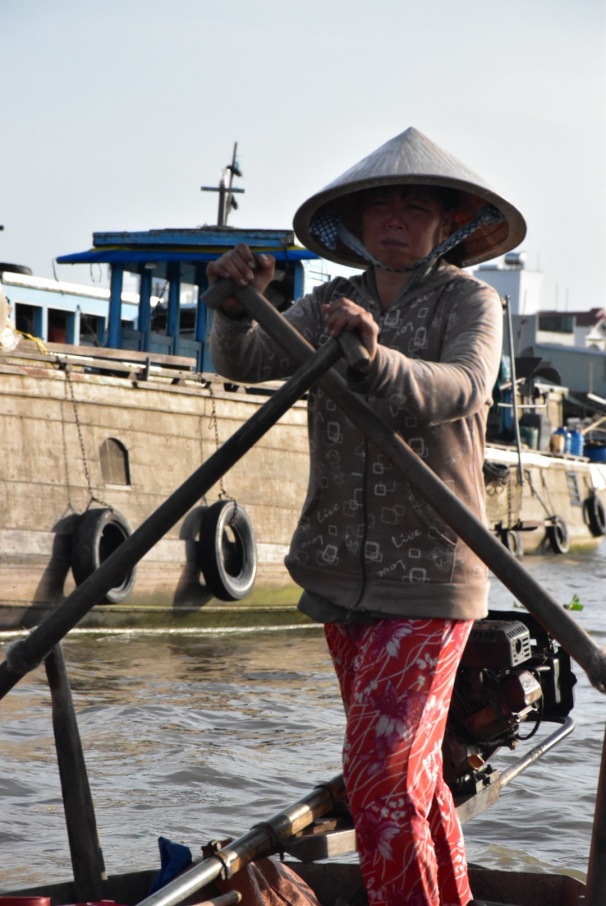 After the noise of the market we headed up a small tributary, enjoying peace & tranquility, until I spotted a river snake & excitedly pointed it out to Sam. It was very idyllic, gently floating along sipping on fresh coconut water. Our friends from Belgium were enjoying a pre-wedding trip & were perfect company. 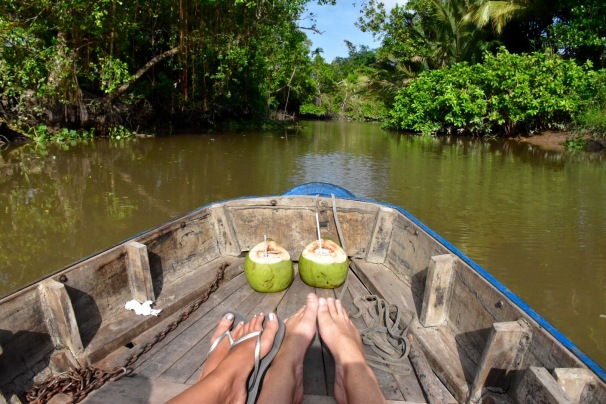 We took an even smaller boat a couple of days later to travel up narrow forest streams in an area where like Ch Chi, the Viet Cong established a base and tunnels to fight the South Vietnamese & Americans. These are on a much smaller scale, but interesting nonetheless especially as they were built alongside waterways. Apart from a small pathway you arent allowed to wander far from the stream & certainly can’t investigate the jungle it meanders through as there remains unexploded bombs & mines in the area. This ever present contrast between the beauty & tranquility of Vietnamese countryside & it’s bloody history is jarring. 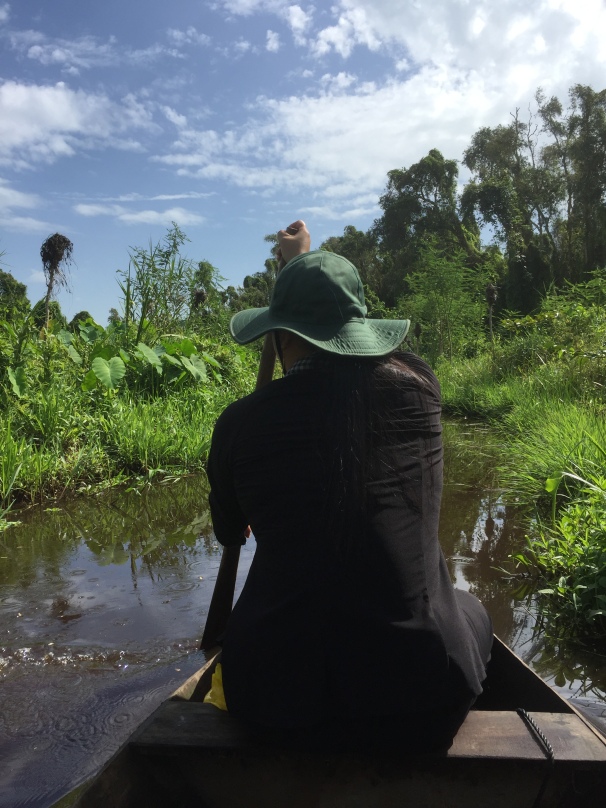 Given the absence of hills the Delta is perfect cycling country – as long as you don’t mind pedalling along in 30+ degrees & very high humidity! The bike trip included visits to sample raw organic chocolate & local coffee. As she doesn’t eat chocolate or drink coffee, Sam wisely headed for the Spa. Happily the bike ride involved several pit stops for food & drink, sampling aforementioned treats, along with sugar cane drinks (delicious), fruit & a very tasty savoury pancake with veg, at the end of the journey. Although the paths were flat, getting up & over several bridges required some ooomph. My friendly guide Mario insisted we take a break in a coffee spot where you don’t pull up a chair, but slip into a hammock. I readily agreed to this but had the usual problems folding my long legs into Vietnamese size hammocks! The guides on the trips in Can Tho we’re all good & if you ever visit, check out Mr Hieu for local tours – they are great. 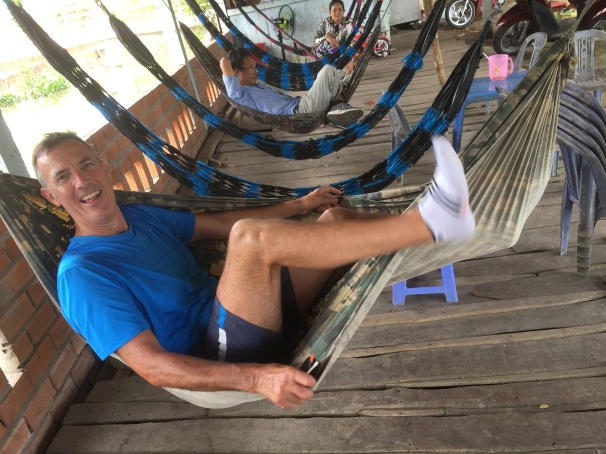 On our last day in Saigon, after travelling back from the Mekong Delta, we decided to stay in the Continental Hotel – famed for being the base for journalists from Time Magazine, New York Times, Washington Post etc. during the Vietnam War. As big fan’s of Graham Greene (& given his Brighton connections) we were delighted to learn that he stayed here when he wrote The Quiet American.
After a detour into Cambodia our travel plans will take us to Hanoi in the north so it will be interesting to refresh our memory of the capital, having visited it around eight years ago, and compare it to Saigon. Although it doesn’t have quite the ‘Old Town’ charm of its northern rival, Saigon is a great city that buzzes with life & never seems to stop. The longer we were there the more we liked it. Interestingly, very few people seem to call it Ho Chi Minh City, (as it was renamed in 1975, after reunification). The preferred ‘Saigon’ is far more evocative. 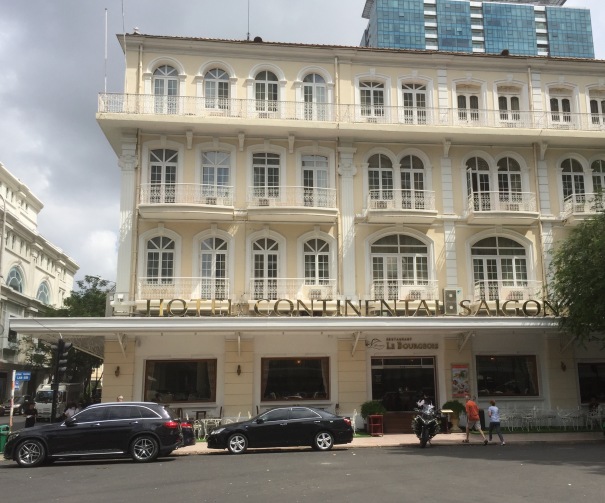 If you are going to go somewhere in rainy season get a decent rain Mac that you can sling on at a moments notice…….& look really stylish 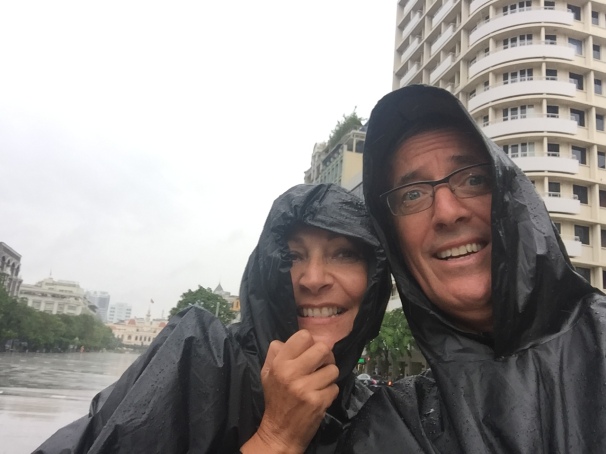 Next Week: we explore Cambodia.