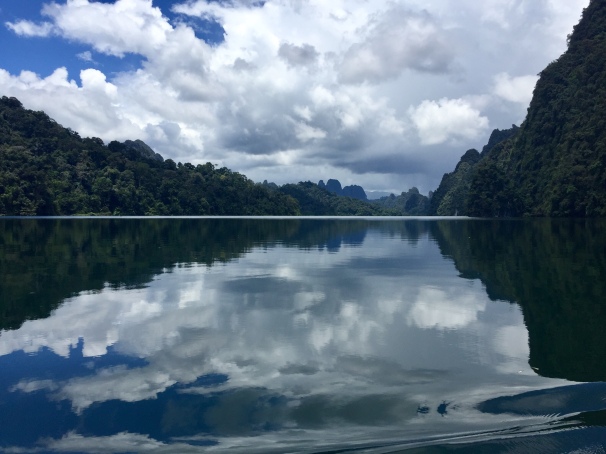 After our busy trek southwards from Northern Thailand, the last couple of weeks have been a real contrast: lazing around on beautiful island beaches and living in a jungle treehouse in Thailand’s premier National Park, Khao Sok.

We’ve been reflecting on the difference between holidaying and travelling. The most obvious one to us is the ability to have lots of downtime where we do next to nothing. Our holidays are usually organised with military precision, making the most of nearly every minute. Whereas now doing nothing is not only fine, it’s essential to avoid total exhaustion. If we were in holiday mode Sam would have quite rightly throttled me by now. It felt a bit odd initially, but we both really value the time where we just rest, read or float about listlessly in the sea knowing that we have days lined up where we will be busy, followed by doing absolutely nothing…or maybe thinking about material for the blog!

Heading to the south of Thailand we decided it was time for some island life, opting for the east coast and the Gulf of Thailand before the rains set in. The beaches are beautiful and quiet at this time of year, ideal for recharging the batteries.

We spent five horizontal days on the south coast of Ko Phangan looking across the water to the north coast of Koh Samui. These beaches are really popular and very busy in high season, but we had some of them virtually to ourselves – a real island paradise.

Away from the numbers

Then after a short ferry ride, we then spent a week on the north coast of Samui gazing at the south coast of Phangan. Obviously we did a little bit more than that….but not much more!

Both islands have their party reputations, especially Ko Phangan and its legendary full moon party (although in truth there appears to be a party arranged for every phase of the lunar cycle). However, that is definitely not our scene (anymore!) and there are more than enough quiet beaches to be found on both islands to escape the booze-filled hedonistic madness.

We haven’t been completely idle: another joy of having time on our side is the chance to plough through books old, new, and varied that we would never normally get the opportunity to read in just a few sittings. I’ve also got my head down and done some real work – a desk, good wifi and laptop enabling me to get on with some projects. Okay, it’s not work in the traditional sense but I’m enjoying the idea of being a nomadic worker and the “office” isn’t too shabby either….

Never had a view like this at Worthing Town Hall

When Sam left her job in Crawley, her colleagues bought her an excellent Lonely Planet coffee table travel book, containing the top 500 places to visit in the world. Tucked away somewhere in the 400’s was a short paragraph extolling the virtues of Khao Sok National Park in south west of Thailand. We decided this would make for a great change from the beach and researched accommodations options, of which they turned out to be plenty. We opted for a treehouse experience – how often are you going to get that opportunity?

This was going to be four days and nights of rustic living, among the sights, sounds and smells of the jungle. You know you’re in for the real deal when the guide book in your room provides advice on how to deal with the variety of animals you might come across in the jungle and (more alarmingly) in your treehouse. For example, you and I know that leeches are harmless…………..but that doesn’t mean I want the little bleeders (see what I did there) anywhere near me! There was also friendly but firm instruction on not leaving doors or windows open, otherwise you might find a troop of long tailed macaque monkeys squatting in your home. Although none got into our lodgings they did make themselves very comfortable on our “verandah”. 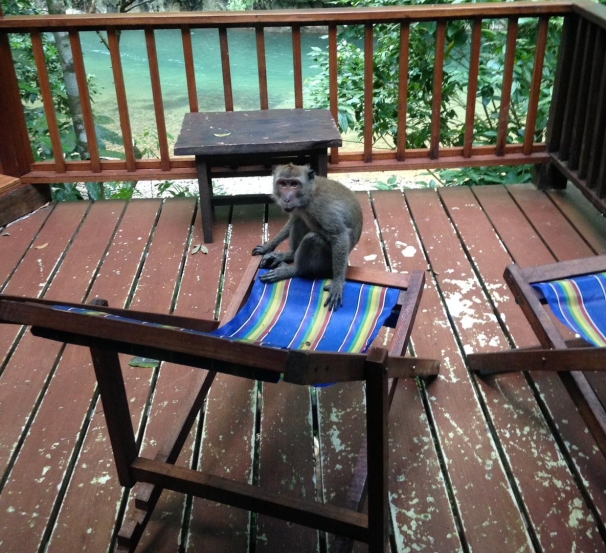 Rejuvenated from our island break we launched ourselves into a series of jungle tours and activities starting with a night safari into the National Park, where our eagle eyed guide was able to point out stick insects, various lizards, frogs, a mouse deer (or was it a deer mouse?) and a sinister looking tree viper hanging high above our heads. Sam was his match though spotting the amazing sight of fire-flys lighting up the darkness and bringing our attention to the presence of a large bat by deploying a high pitch scream as it flew in front of her face. When we turned our torches off we were plunged into pitch blackness and the sounds and smells of the jungle were heightened. Tramping into the dark jungle was a unique experience and great fun. We felt proper adventurous!

The next day we took an hours drive to Chiew Lan Lake to see the beautiful limestone karsts that are studded throughout brilliant blue green water. This is breath taking scenery – as good as the far more famous Halong Bay in Vietnam, but without thousands of tourists cramming the waters.

….we could easily fill the blog with pictures of this gorgeous scenery, but here is a bit of footage instead..

On getting to shore we had a short trek before a bamboo raft took us to some caves, before a bit of downtime swimming and kayaking in the lake.  During the trek we found the hidey-hole of a tarantula with its legs peeping out….(note camera shake)….

….and by way of contrast signage warning of larger beasts… 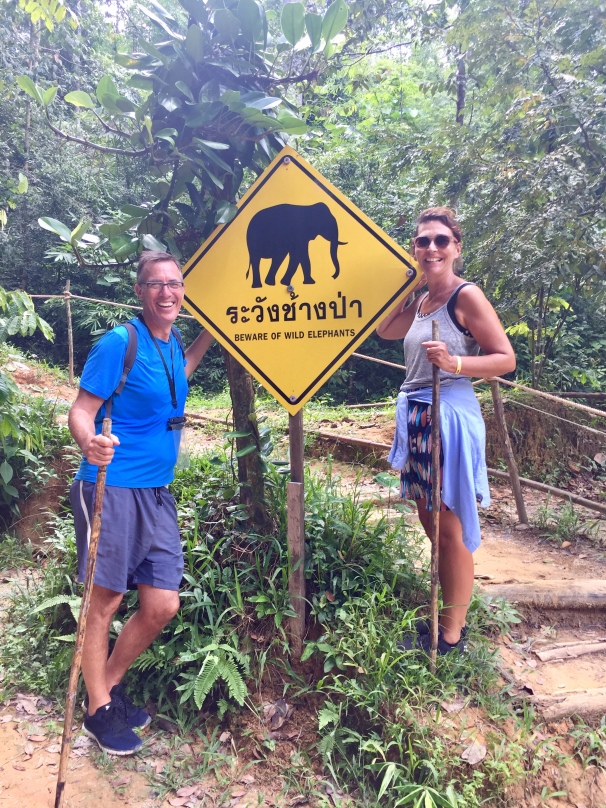 After our exertions we took a canoe trip down the River Sok, which started inauspiciously when a frail bamboo bridge I was crossing, gave way with a loud crack, under my burgeoning weight, much to Sam’s delight. Karma immediately saw to it that while failing to control her hilarity her left leg disappeared into river mud sinking her knee deep. Having abandoned our dignity on shore we sailed gracefully downstream with our guide. Strangely the trip included stopping for a cuppa boiled on a campfire…. all we longed for in the sweltering heat was ice cold water, but after all the trouble the guide went to, we felt obliged to drink the hot tea.

It did give us another chance to stop and look at the incredible limestone rock formations that never fail to impress: 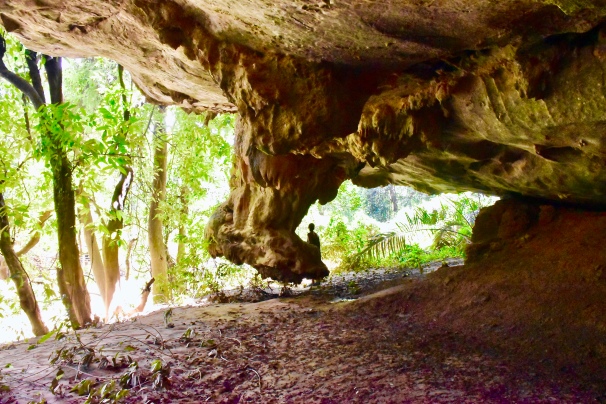 On our last day Sam wisely ducked out of a walk that was billed as a trek into deeper jungle. Our guide wanted to show me his village and take me off the beaten track. He advised that I regularly rub in bug repellant as the jungle would be full of leeches. My heart sank a bit further when I observed he was armed with a machete to help clear the path we were to take. Twenty minutes in my clothes were drenched in sweat, breathing heavily and thinking I wouldn’t last much longer! Leeches kept attaching themselves to my shoes so I had to keep vigilant, brushing them off before they made it to my skin. Yuk! Thankfully the heat, humidity and machete hacking got to my guide and he started to slow down. We certainly were off the beaten track, in fact there was no track for large parts of the trek. As we faced another section of dense jungle with no obvious route ahead I asked “….er…..so when was the last time you came on this trek exactly?” My guide stopped and thought for a moment “over two years ago” came his reply! No wonder there was no path to follow. Here is a pic of the typical view of our trek….

Between warnings of leeches, poisonous plants, wild pigs and spiky bamboo I vaguely recalled him mentioning that the second part of he trek would involve walking beside and through a river. So I was thrilled to hear the sound of a river babbling away after 90 minutes of deep jungle experience. I did briefly here the call of the Gibbon (probably warning me about the leeches), but didn’t spot any wildlife. My guide was as good as his word and we spent the next hour walking through fast cool waters that refreshed my tired feet and made the whole experience well worth the effort. I felt quite triumphant that I hard done it and was coming out alive.

However, the leeches had the final say, despite my running battle with them one had made its way onto the back of my leg and was happily sucking away. No pain, but it turned out to be quite hard to staunch the flow of blood once I’d got it off me. By way of consolation I finished the trek with a spot of tubing down the River Sok – great fun and a brilliant way to see the river and its wildlife (inc a mangrove snake) from a different angle. Apologies for the pincer legs and knobbly knees that swing into shot…..

During our last night when we were settled in our bed, when there was a noisy commotion near our heads, something quite large was in our room and far too close for comfort. As is the way when these things happen, I was despatched by Sam to leave the safety of our mosquito net cocoon and with iPhone torch set to stun, identify and presumably deal with the cause. As I gingerly stepped into the bathroom I found a very large lizard staring back at me with four eyes. “That’s unusual” I thought to myself, until I realised that two of the eyes belonged to a creature in the lizards mouth, which I think was a frog, but could have been a large cockroach. Sadly this pic doesn’t do it justice, but it was a real monster..

We loved our jungle adventures and it is incredibly exciting and humbling being so near to so much untarnished beauty. We can’t speak highly enough of Khao Sok – it’s turned out to be a really unexpected gem in our journey. Having said that after five days up in our treehouse we were ready for a return to creature comforts, air-con and a really hot powerful shower.

With a trip to Penang in northern Malaysia planned, we drove south from the jungle to Phuket where a short flight over the border would take us to our next country. We weren’t particularly keen on the idea of Phuket – another Thai island that comes laced with pre-conceptions and a dodgy reputation. However, we didn’t realise just how big the island is and how easy it was to find a hotel sitting next to a deserted beach and a small forest. With no desire to see the islands lowlights, we took root and enjoyed a few more days of island snoozing. 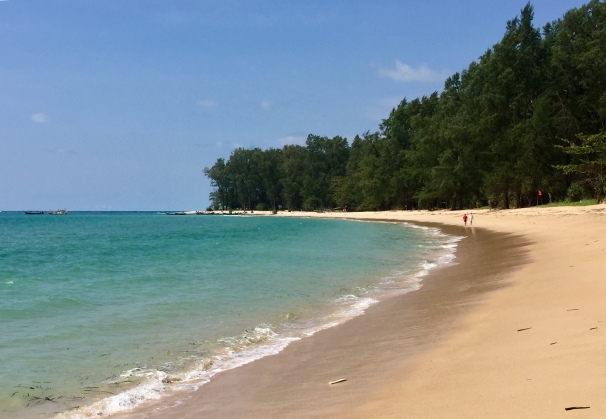 If you follow the Thai courtesy of leaving your footwear outside your home, it pays to be vigilant. One morning while putting on my trainers I could feel my toe pushing against a rolled up sock. “That’s odd…..both my socks are on the floor” followed by a rapid realisation that something else was pressing against my toe in my shoe. After a panicky withdrawal of my foot a rather disgruntled and crumpled frog hopped out, obviously enjoying the damp and clammy home it had made for itself until I launched my size 10 at it. I’m pleased to report no damage was done to the frog or myself. However, Sam was less than happy as I burst into a full length version of “Froggie went a Courting”  for the next hour.